Ya me he suscrito | No volver a mostrar este mensaje.

After two young girls died on Tuesday, the number of victims of fumigations in the northern region of Paraguay increased.

The number of victims of the toxic fumigations perpetrated by the agro-exportation industry in the Curuguaty department, in the north of Paraguay, reached 175 this Sunday, adding to the death of two girls for the same reason in the night of Monday, reported the Hospital of Curuguaty district.

The Hospital authorities explained that the patients presented the same respiratory symptoms, including acute pain, convulsions, and vomits than the girls.

The Health Ministry sent a team in the department in order to assist other potential victims, as well as to confirm the fumigations' responsibility in the issue.

Demonstrations have followed the death of the two sisters, one of six months, the other of three years, as the government first denied the fumigation's responsibility after their autopsy, but blamed a respiratory infection instead.

They announced the pursue of the protests tomorrow on Monday in the department, including the cut of the traffic on the roads.

They demand a serious investigation about the events, and a better response to the impunity of the major land-owners of the country, who do not comply with environmental laws on fumigations, request they have been formulating for years in vain.

The agrochemicals in the pesticides used in the exploitation of soy in the country – which represents eight millions of hectares according to the producers – have been responsible for numerous malformed born children, undesired abortions, as well as other diseases, tumors and death cases, have claimed the National Peasant Federation (FNC) and specialists.

According to the FNC, about 60 millions of liters of agrochemicals are being used each year in the country. The cultivation of soy extends on millions of hectares without any type of gate that could preserve the human communities, creeks or a minimum of biological diversity. 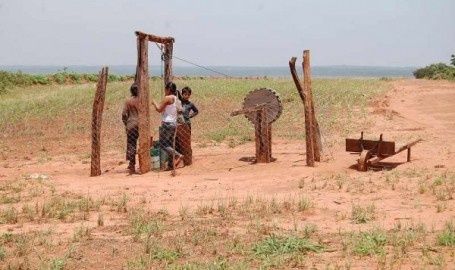 A well of water on an indigenous land, in the middle of soy fileds ​(Photo: BASE Investigaciones Sociales).

The agrochemicals include among others the famous roundup produced by the U.S. transnational Monsanto, which have been authorized to commercialize many more GMOs and agrochemicals since left-wing President Fernando Lugo's dismissal in 2012.

The department of Curuguaty, where occurred the health catastrophe, had already been the decorum of the bloody tragedy of 2012 that caused 17 deaths in a confrontation between peasants claiming their land and policemen, and that led to the “parliamentary coup” against Lugo.